The winner in the senior category this year was Professor J. Been, for his research project entitled ‘A biological signature for maternal vulnerability, and its impact on embryonic growth’. He received a cheque of € 40,000 from the hands of the foundation president.

Two researchers received awards in the junior category: Dr. N. Lahrouchi from Amsterdam UMC for his abstract of proposal for VENI application ‘Genetics of congenital heart disease’, and Ms. N.A.S. van Zundert from Erasmus MC for her project entitled ‘A biological signature for maternal vulnerability, and its impact on embryonic growth’. Both junior medical scientists received a grant of € 15,000 as a contribution to their projects. The foundation congratulates all awardees and wishes them success with their promising projects.

We look back on a successful event and would like to thank all participants for their presence and contribution. 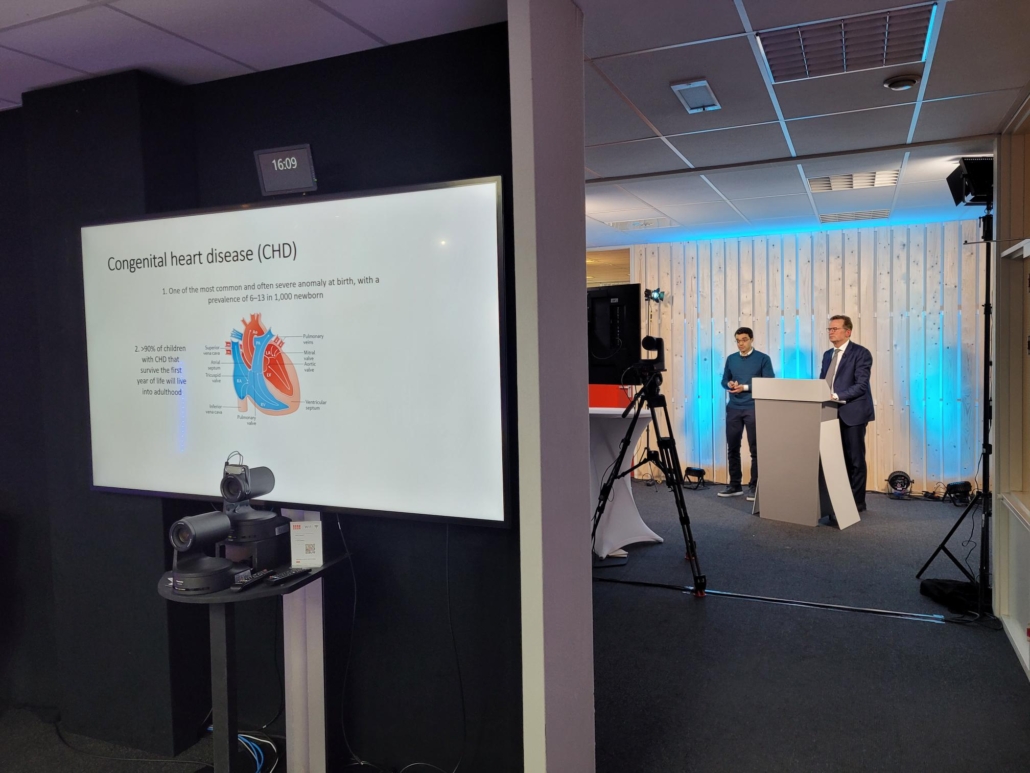 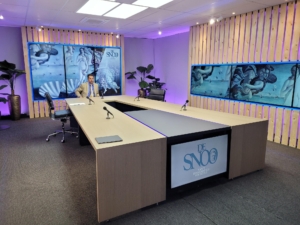 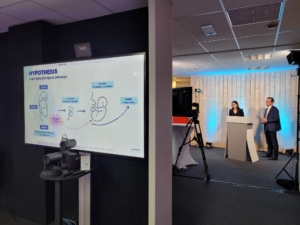 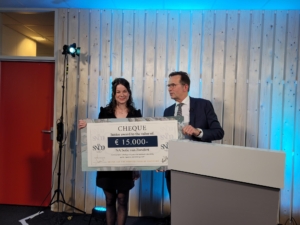 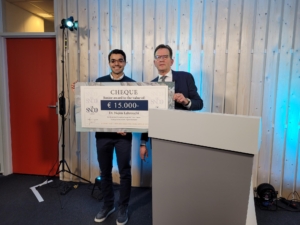 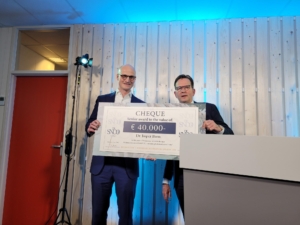 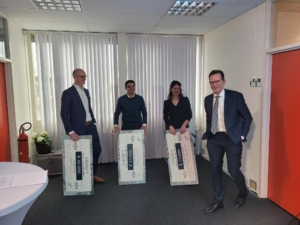 Symposium title and program will be announced later.

One of the most exciting and controversial discoveries over the past decade is that conditions experienced early in life – even before birth – can have long-lasting impacts on health and ageing 1,2. Longitudinal studies on humans and experimental studies using animal models also suggest that these effects may span several generations 3. There is an increasing body of evidence that shows that maternal effects on health are caused by epigenetic changes in the embryo that remain stable throughout life and possibly could be passed on to subsequent generations 4,5. For example, a longitudinal study of individuals that were in utero during the Dutch Famine at the end of the Second World War has demonstrated local and genome-wide changes in DNA methylation that can be linked to increased risk of cardiovascular and metabolic disease 6,7. These effects appear to primarily affect embryos exposed during the first trimester, and recently studies in humans point to the importance of pre-implantation and early implantation stages, when drastic changes in DNA methylation occur 8,9.

Aims of the project

Recent technical developments regarding single cell transcriptomics and (DNA) methylomics 10,11 as well as the development of a protocol to mimic implantation in mice 12 opens exciting opportunities to study hypothesis driven questions related to the theory of developmental origins of health and disease.

The extended culture model has been developed under the supervision of one of the researchers that was part of the team that has developed and published the mouse implantation model 12. The human (frozen-thawed) embryos at day 3 post fertilization (dpf) have been first cultured to the blastocyst stage (day 5), graded them using the Gardner and Schoolcraft grading system and then cultured in a two-step protocol to mimic implantation (from day 5 to day 14) in 2D and in the 3D-scaffold. The results of the 2D and 3D-scaffold have been evaluated by immunofluorescence to assess morphology and lineage segregation (extraembryonic lineages, endoderm ectoderm, mesoderm and germline) using different markers. In the 2D- system, the embryo survives better than in the 3D-system. A manuscript with the results obtained from the 2D-system has been submitted and the results of the 3D system is expected to be submitted by the end of 2018.  Interestingly, we noticed that when using our extended culture method, aneuploid blastocysts excluded the abnormal cells by day 14. These important finding, is being explored and a manuscript is being prepared.

The benefits of including endometrium cells (endothelial cells and or glandular cells) in the 3D-scaffold, as not been investigated yet. But those experiments will be performed in the continuation of the project, as one PhD has been recruited to continue with this project.

Influence of metabolic changes in the epigenetics of the human blastocycst

In collaboration with the Hubrecht Institute (Prof. van Oudenaarden), we are characterising the transcriptomics and methylomics at single cell level during the preimplantation period. Most importantly, we performed single cell isolation of cells from individual sibling and from those we have requested and obtained the genomic DNA (exome) from the parental bucal swabs. This has allowed us to identify the existing SNPs in the embryos. This work is in progress and will be the base line to then investigate the transcriptomics and methylomics using the extended protocol on sibeling embryos and to test 3 culture conditions known to change DNA methylation (folic acid, vitamin A and vitamin C).

By: Ewart Kuijk, recipient of the De Snoo award 2017

First of all, I am highly grateful for having received the De Snoo award in 2017. In addition to having been able to perform the study explained below, the De Snoo award has propelled my research further resulting in additional funding to extend my studies on instability of the embryonic genome, thereby helping me to establish my own independent research line.

Sperm DNA damage affects post zygotic genome function and interferes with proper embryo development, thereby impacting on miscarriage rates, fertility and postnatal pathologies. Nevertheless, the direct consequences of sperm DNA damage on the embryonic genome are largely unknown, because this requires single cell and low input sequencing techniques that have only recently been developed. The aim of this study was to elucidate how sperm DNA damage affects embryonic genomes. By absence of homologous templates we hypothesized that damaged sperm will be repaired through the inaccurate process of non-homologous end-joining which will result in the formation of Structural Variants (SVs) such as copy number variants (CNVs), translocations and inversions. Bovine embryos were produced with sperm subjected to different doses of γ-radiation (experimental group) and with untreated sperm (control group). Increasing doses of γ-radiation resulted in decreasing blastocyst rates. Moreover, embryos produced with γ-radiated sperm contained more micronuclei and other nuclear aberrations than control embryos. In follow-up experiments, the resulting zygotes were cultured until the 2-cell stage after which both individual blastomeres were collected and subjected to single-cell sequencing (control group n = 36 embryos, 2.5 Gray group n =42 embryos, 10 Gray group n = 18 embryos). This revealed that embryos produced with damaged sperm contain significantly more chromosomal segmental gains and deletions than control embryos (fig. 1). Additionally, experimental embryos contained more aneuploidies than control embryos, indicating that sperm DNA damage can induce mis-segregations (fig. 1). Strikingly, for all the observed gain, a reciprocal loss was observed in the sister cell (fig. 1, 2). If the 2-cell stage embryo would have been sequenced “in bulk” instead of both blastomeres separately, the genome would have appeared copy neutral and all variants would have been missed.

Single-cell sequencing of all blastomeres of 8-cell stage embryos produced with damaged sperm indicates that the reciprocal gains and losses observed at the 2-cell stage are preserved within their separate cellular lineages. I am currently sequencing entire blastocysts derived from damaged sperm to gain more insight in the effects of sperm DNA damage on the embryonic genome at later stages of development. Together, these results demonstrate that sperm DNA damage leads to reduced developmental competence, probably caused by the observed genomic aberrations. Embryos that succeed to develop further, are at risk to carry de novo structural variation. These findings may be of relevance for fertility treatments of males with high levels of sperm DNA damage. This study delivers the required proof of principle to be extended to study the effects of sperm DNA damage on human embryonic genomes, as was originally proposed. The manuscript for this study is currently in preparation.